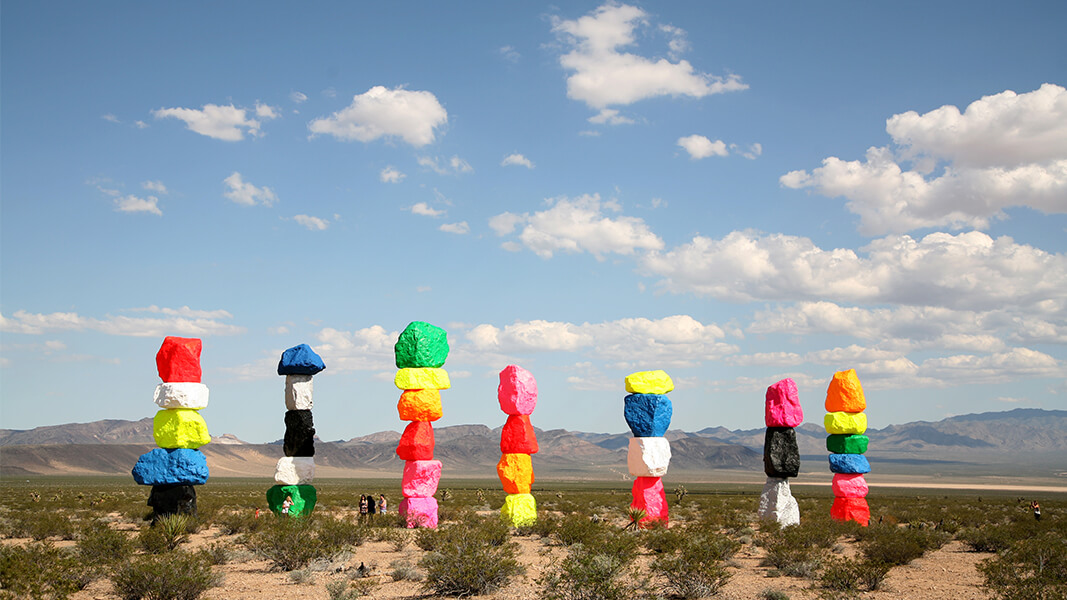 Over a thousand people visit “Seven Magic Mountains” every day from across the world. A magnificent piece of an art installation that consists of a sequence of rocks making a neon-coloured tower in the Nevada desert just outside of Las Vegas. Ever since it’s been noticed widely, these 30-foot-tall towers have become a social media sensation the art admirers around the world.

What’s even more beautiful is its backstory. Nevertheless, the installation was initially opened for a short stint of just 2 years, it continued to be on display due to its popularity & remarkable success. The stakeholders have convinced the authorities to keep the show on till 2021 due to the immense interest people showed in this artistic masterpiece.

“The location is physically and symbolically midway between the natural and the artificial,” said Rondinone.

I think he is absolutely right when he says so. Just by looking at the pictures of the majestic site on the internet can, in part, let you experience what Rondi wants to point. Reaching there from Las Vegas will be comfortable with a car. There are no options for public transport. To see the artwork from your sight just keep your hands-on on Google Maps. One must note that there is a parking facility nearby and parking along the roadside is highly precluded.

The land of artwork is a serene setting that makes one feel like it’s a dream while one’s awake. It’s possible here! However, be prepared for the weather. Being in the desert, keep yourself hydrated. Another thing to do here is to use your smartphone to immerse yourself in an interpretive tour. You may want to note that there are no restrooms around the site so it’s advisable to be prepared while leaving the city.

I believe that the best time to visit Seven Magic Mountains is in the morning. The sun shines bright right on the magnificent structures of faith, and light paves way for stellar photos for you to post on Insta Feed. While summers are really hot, one must carry a jacket to be comfortable when it’s too windy.

Open 24 Hours! With the total cost of the project coming out to be $3.5 million, the visual treat is accessible for the visitors round the clock, which makes this spot another hit tourist-wise. You don’t need to make any reservations to be there. It’s very inviting in itself. You just have to be there if you want to.

To be honest, the Swiss artist Ugo Rondinone would have never expected that his debut in the form of a large-scale public art installation in the desert would be this big a hit. There are not many mentions about it but Rondinone did not work alone on this. In fact, he tied hands with the Art Production Fund and the Nevada Museum of Art to give us something more than what anyone demanded. Although ‘Seven Magic Mountains’ is already exceeding the time frame of its existence because of the love people showed for it. But while you are reading this article it is open. Rest we will keep you updated.